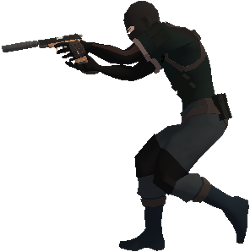 Intruder is the stealth multiplayer experience. We were inspired by the great single-player campaigns of Metal Gear Solid, SWAT3, Deus Ex, and Splinter Cell to create a team-based multiplayer game. Intruder allows for stealth, teamwork, tactics and environmental interactions never before seen in a multiplayer game. Lure enemies into motion-detectors near explosive traps. Watch enemy movement through live security cameras and alert your teammates using the hand radio. Use real SWAT hand signals to communicate silently when enemies are nearby. In Intruder, amazing stories and emergent gameplay come from the players' actions to provide an experience you will never forget.

"The firefight at the end of this video, lit by the flashes of the guns, has pretty much sold me. I want this."

"You'll see that Superboss Games have created something rare - a shooter where you really have to think before pulling the trigger."

"All in all, the tactics behind Intruder seem to be shaping up quite well. Even more impressive to me is how different Intruder is compared to Superboss' first game, frantic platformer Project Stormos."

"Games like Intruder matter because they try new ideas. The level of complexity really is astounding and that's going to scare a lot of players off, but it's also already drawn in a loyal community who really buy into the vision of the game."